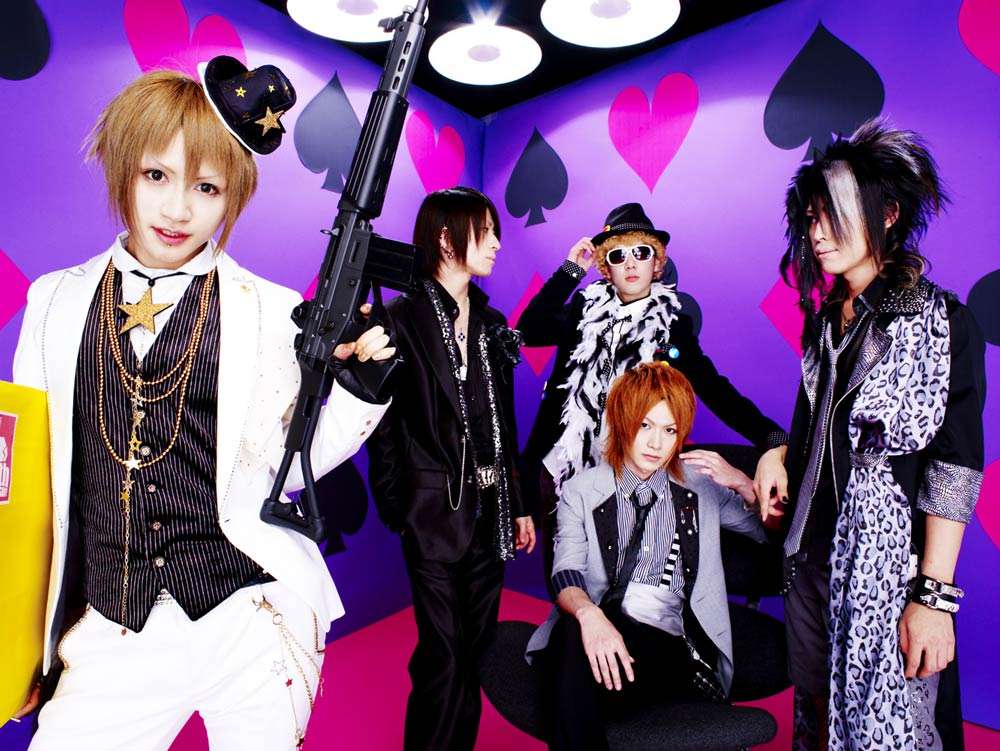 An Cafe - short for Antic Cafe - is a Japanese Visual-Kei rock band by miku (Vocal), takuya (Guitar), kanon (Bass), yu-ki (Keyboard) and teruki (Drums). The band was formed in 2003 by the original member of miku, kanon, bou and teruki who participated in the band a few months later. After nou left the band in April 2007 for pursuit of his own career, they welcomed a new members, takuya and yu-ki, and have become a quintet now.

An Cafe boasts an overwhelming popularity among teenagers for their life-sized lyrics and the danceable rock sounds which intrigues the audience to run high. Their songs will be appealing to ALL J-POP listeners without any doubt, not limited to the Visual-Kei fanatics, and they even have a potential of being accepted by the audiences who are not usually familiar with the music from foreign countries. It will also never be too much to say that their live performance is truly an entertaining show, where the individual band members enjoy demonstrating their unique personalities.

Their first release was a concept album "Amedama Rock" in 2005, compiling their early-period works which had been released as limited-edition items. It was followed by "a trilogy of HARAJUKU" (including the single "TEKESUTA KOUSEN", "ESCAPISM", and "MERRYMAKING"), and its associated live shows held at 3 different stages in HARAJUKU area in Tokyo went instantly sold-out.
In the end of 2005, they released their first full album "SHIKISAI MOMENT". Early in 2006, they had a nation-wide tour "LIVE CAFE TOUR'06 - NYAPPY GO AROUND". They also had a first solo hall live "9 DANCE WAR" at Tokyo Kudan Kaikan with the concept of "Kizuna - Bonds" as if they were confirming their strong emotional bond with the fans. Those lives all went on a great success, and further, the band organized an entrance-free outdoors live "YAGAI DE NYAPPY" gathering 7000+ audiences - who are now called as "CAFE-KKO" (meaning An Cafe's following).
In fall 2006, the band released, in consecutive three months, 2 singles ("Smile Ichiban Ii (Onna)" and "SNOW SCENE") and the smash hit 2nd album "Magnya Carta". To commemorate its release, the band started a unique project in a mobile SNS "State of Nyappy", where they established virtual constitution for CAFE-KKO and many of CAFE-KKO register themselves to communicate with the other residents of the Nyappy State.

The year 2007 was the time when the band experienced a leaving of the former member bou (quit the band since the live at Hibiya Yagai Concert Hall on April 30), but was the time to be reborn with promising new members, takuya and yu-ki. In June, they had a debutant live series of new An Cafe in the three biggest cities in Japan - Tokyo, Nagoya, and Osaka, through which the band managed to go through the transition period to become more powerful as a band. Their first overseas live was done also in this year. They head-lined a Japanese Rock festival, "J-Shock 2007" held in June at Palladium in Cologne, Germany, and the performance was showered with superlatives from the local media as well as frantic cheering from the audiences.
The band then headed straight for the nation-wide tour "LIVE CAFE TOUR '07 – NYAPPY GO AROUND 3" in July, and moved to Korea in August to have their first live show in Asian region. Their famous entrance-free outdoor live this year was held in Osaka, entitling itself "YAGAI DE NYAPPY-yanen". ("yanen" is a ending of a word tipically used in Osaka region.)
In August 22, 2007, the band released a single "Kakusei Heroism", which became the theme song of a Japanese Anime "Darker Than Black". The following single "Ryusei Rocket" was released in November 7 also with a tie-in with a manga-based drama "Fuuma no Kojiro". From this date, the band get started with the tour "LIVE CAFE TOUR '07-'08 – NYAPPY GO AROUND FEVER-". Their much anticipated new album are scheduled to be released in spring 2008.