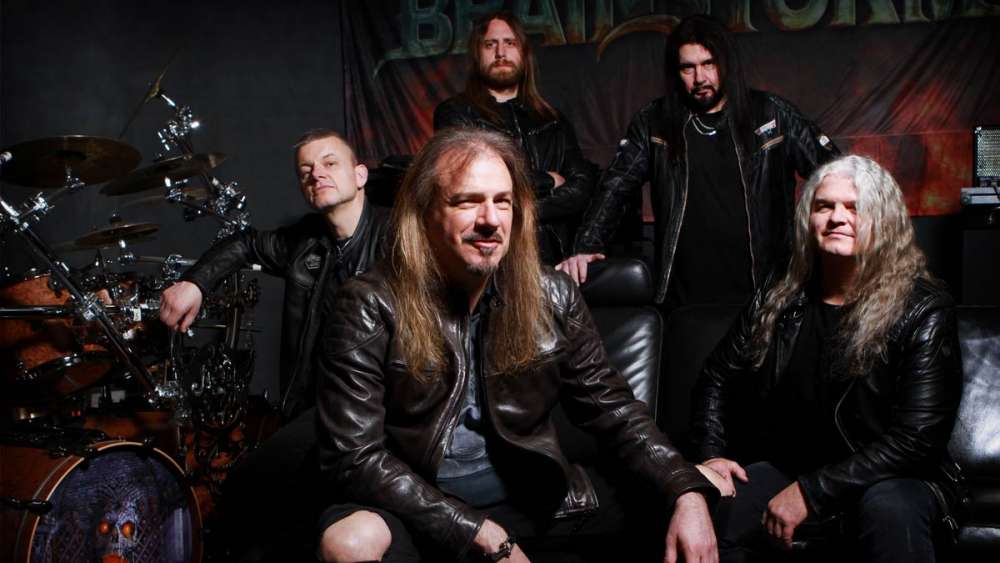 The chain of circumstantial evidence is long and speaks for itself: Brainstorm’s new album, Midnight Ghost, is a veritable milestone. There are plenty of reasons for this, starting with the initial compilation of ideas through the meticulous development of the song arrangements and concentrated production at Sebastian ‘Seeb’ Levermann’s (Orden Ogan) Greenman Studios to the atmospheric cover artwork courtesy
of Gyula Havancsak (Accept, Stratovarius). All the cogs have obviously meshed and produced a result that’s bound to delight all power metal fans and has even surprised the five band members themselves. “It’s pretty unusual that musicians still get shivers down their spines when they listen to the new material after a long and energy-sapping production. In this case we can really say that all Brainstorm musicians are total fans of our new recording,” says vocalist Andy B. Franck, adding: “Midnight Ghost is the album we want to be measured by in the future.”

Are there special reasons for this creative avalanche that was kicked off almost two years ago and has now culminated in ten new songs?
Andy B. Franck offers at least a vague explanation, although he can’t elucidate all phenomena on the new album.

“Even during our last tour we started to collect initial ideas, which helped us to infuse the new material with the adrenalin from the shows. Subsequently we invested a lot of time and effort into the development of the tracks and totally focused on the production. We consciously put aside every new number for a couple of weeks to keep the necessary distance. And, last but not least, our collaboration with ‘Seeb’ really struck home. He was not only our producer during the three months’ recording process, he was practically our sixth band member. Seeb helped us to draw on our greatest strengths and take Brainstorm to another level.”

The enthusiasm that oozes through Franck’s explanations also echoes in the songs on Midnight Ghost. Be it the anthemnic opener Devil´s Eye, the driving When Pain Becomes Real or the punchy Haunting Voices. No doubt about it, Brainstorm live up to the term "melodic power metal" and deliver the full range of their typical trademarks: awesome melodies, dynamic grooves and extremely heavy guitar riffs.

“I feel that positive qualities have never featured as clearly as this time. Midnight Ghost is faster, more melodic and at the same time also tougher than all our previous releases,”

reckons Franck, who, together with his team mates Torsten Ihlenfeld, Milan Loncaric (both guitars), Antonio Ieva (bass) and Dieter Bernert (drums), is responsible for this powerful oeuvre. The thoroughly positive impression is rounded off by the powerful Ravenous Minds video clip (Franck: “At the express request a pure performance clip”), a lyric video to support The Pyre and a making-of in Revealing The Darkness.

Talking of ‘darkness’: Although Midnight Ghost is no concept album in the classic sense, there’s a thematic thread: the fear of ghosts, monsters under your bed, the bogeyman in your wardrobe, wild beasts in the night … in other words: fears that many of us have had since childhood. In line with hits, on Jeanne Boulet 1764, Franck sings about strange events that took place in Gévaudan in southern France 250 years ago when around 100 children, adolescents and women were killed by a wild animal.

And last but not least: This time around, Brainstorm don’t compromise when it comes to the whole package: Midnight Ghost will be available on CD, CD/DVD digibook (incl. bonus-DVD Scary Creatures Over Europe 2016, recorded at the LKA Stuttgart), blue vinyl, yellow/blue splatter vinyl and limited-edition box set. So the same motto applies as to the album’s musical substance: Everything you could wish for!