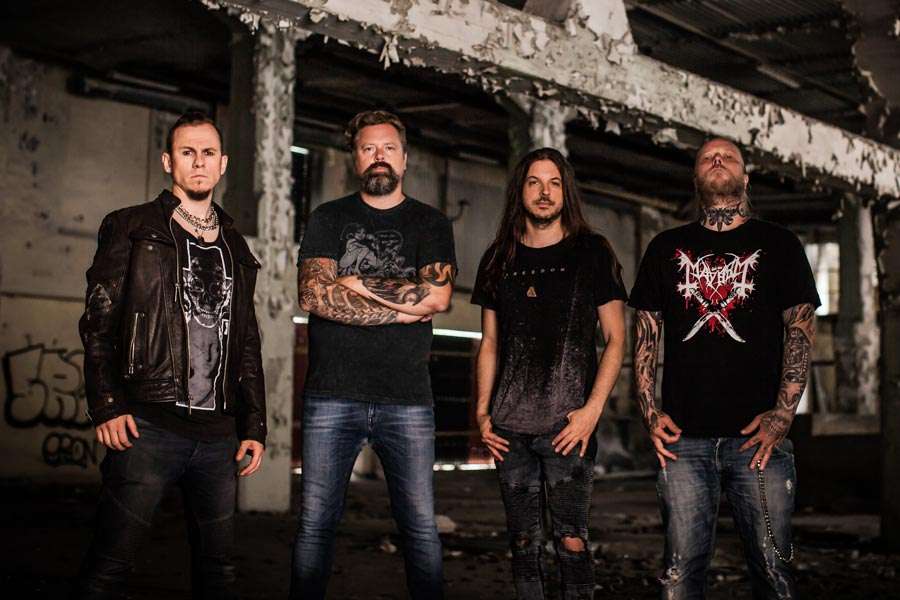 When it comes to unearthing new heavy music that will stand the test of time, it always pays to observe what the experts are doing. A four-man testament to hard work and creative excellence, Cyhra showcases the pooling of a huge quantity of modern metal talent. Formed in 2016 by long-time friends ex-Amaranthe vocalist Jake E and former In Flames guitarist Jesper Strömblad, these vital veterans are about to light a fire under the contemporary metal scene that promises to blaze for decades to come. The band’s immaculate debut album, Letters To Myself, is the end result of an artistic partnership that was, as Jake E explains, plainly meant to be.

“At the beginning of 2016, Jesper and me sat down to have a cup of coffee, and we were discussing what we wanted to do with our respective careers. Jesper said that he was going to go and record a solo album and I was saying that I was actually walking the same path, although I didn’t know if I was going to leave Amaranthe or just do something completely different. Jesper asked me if I’d be interested in singing on his solo album and then I more or less asked him the same thing, would he play on my solo album? Then we discussed what kind of music we each wanted to do, and after ten minutes Jesper stood up and said ‘What the fuck? We want to do exactly the same thing! Let’s start a band instead!’ That’s how it all started. A couple of months later I decided to leave Amaranthe, and this became my main priority.”

Completing this insanely gifted quartet are former In Flames bassist Peter Iwers and Alex Landenburg, current drummer with power metal titans Luca Turilli’s Rhapsody and a former member of thrash legends Annihilator. As the explosive and exhilarating songs on Letters To Myself reveal, the chemistry between these four musicians has been instant and extraordinary. Sometimes all the pieces of the puzzle just fall into place…

“I always had Alex in my mind for the drum position,” says Jake. “We always bumped into each other when I was out touring. I said to Jesper, ‘I know this guy and you’re going to love him!’ I sent two or three songs to Alex and he loved them and became a member of the band almost right away! We were almost at the point of talking with labels when we thought that maybe Peter would like to be involved too. He was still in In Flames at that point, but he wanted to join. He decided to leave In Flames a couple of months later, but that had nothing to do with us asking him to join Cyhra. But suddenly we had a steady line-up! It was fun that Jesper and Peter ended up in the same band again, too… that’s pretty cool.”

Although by no means repeating past glories, Cyhra’s debut album undoubtedly features plenty of the magic that each member of the band has become known for over the years. From the blissfully melodic thrust of Jesper Strömblad’s riffs and hooks and the soaring, soulful splendour of Jake E’s unmistakable voice to the pummelling, groove-driven precision of Peter Iwers and Alex Landenburg’s rhythmic bedrock, every last moment crackles with the excitement of fresh territory, new challenges and a brand new identity for all involved to embrace.
An album of concise anthems, every one of them blessed with a huge chorus, Letters To Myself sets out this band’s stall in no uncertain terms: from the high energy riffing and skittering groove of opener Karma and the monstrous power and melodic finesse of Heartrage through to the overwhelming emotional thrust of grand ballad Closure and the pop-tinged melo-death attack of Holding Your Breath.

“When it comes to a style, I’d just say that this is really catchy metal!” laughs Jake. “You can hear where we’re coming from but we’re not cut’n’pasting anything from our old bands. We have our own ways of singing and playing so yeah, it’s recognisable. I don’t put labels on music. For me it’s either good music or bad music – they’re the only categories I have! I guess we aimed to get some kind of elements from our other bands. I’ve always been focused on choruses, but I also wanted to add some more modern touches, some of that alternative metal vibe. It’s hard to put a label on it, though, and that’s a great problem to have.”

Beyond the obvious thrill of starting a new band, Cyhra also represents something deeper and more profound for guitarist Jesper Strömblad. Having battled with addiction for many years, this latest creative step marks a wholesale comeback for one of modern metal’s most distinguished protagonists, and the songs on Letters To Myself delve deep into the emotional turmoil and quest for inner strength that Jesper has experienced in recent times. Newly invigorated and back to top form, his confident and artistically joyous return is a cause for celebration on every level.

“This album must be seen a little bit as Jesper’s comeback,” agrees Jake. “He’s never been silent about his problems with alcohol and other things. We talked a lot and I listened to what he had to say about his condition and his feelings and all his anxiety problems. I wrote the lyrics a lot from his perspective, but also from mine, writing about being in a bad situation, whether it’s a band or a relationship or a problem with alcohol. The album is pretty true to our life experiences and I think people will be able to relate to it. It’s a dark album but it still has that positive vibe, which is kinda weird!”

With such an impressive collective pedigree, the buzz around Cyhra has been growing at a rapid rate since the band unveiled their plans earlier this year. When Letters To Myself hits the streets, it seems likely that these revitalised metal diehards will make a swift and sudden impact. An exciting new chapter for all concerned, Cyhra are in this for long haul and ready to take their message of hope to the masses.

“We have our own headline show in Helsinki on the 27th of October and that’ll be our first ever live show,” Jake states. “We’re gonna be a band like any other and we’re gonna tour hard. I really don’t want people to think this is some kind of project. It’s a full-blown band and we’re gonna work our asses off!”