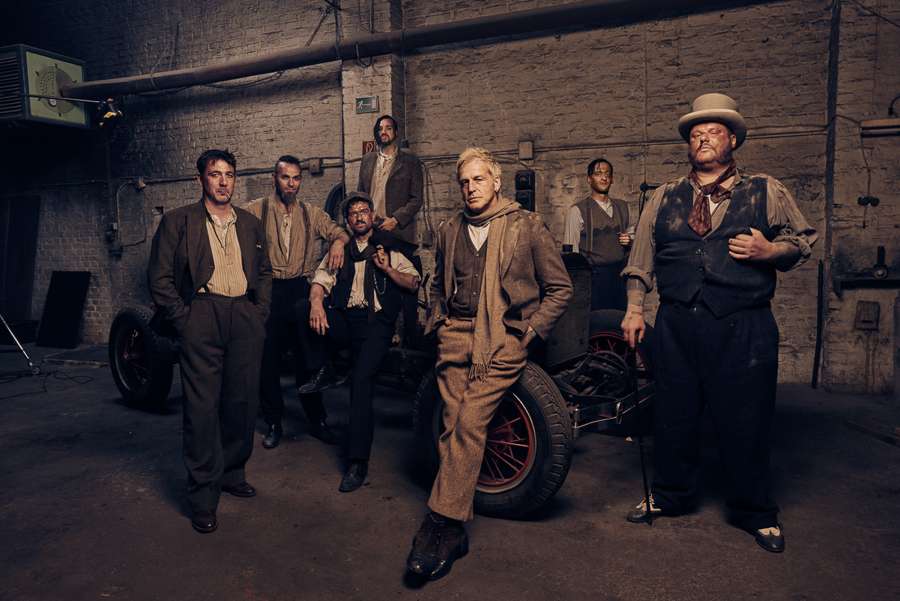 The thunderous applause of last year’s “20 Wahre Jahre” anniversary festivals at the Loreley is still ringing in our ears. It was a party befitting their status that IN EXTREMO celebrated with their fans. Sold out! Recorded by WDR ROCKPALAST for TV! Remembering the atmosphere of those evenings in late summer 2015 still causes goose bumps.

Now Germany’s biggest medieval rock act is back! With their twelfth studio album “Quid Pro Quo”! Platinum/gold awards, no. 1 chart positions, sold-out venues and celebrated festival performances have not exhausted these seven. Quite the opposite: they’re chomping at the bit again!

“You slide in the disc and know from the very first note that you’re listening to IN EXTREMO,” frontman Micha “Das letzte Einhorn” Rhein enthuses about this latest release. The sound is unmistakable and familiar, but the septet has not been standing idle. “We may sound a little more rock- and metal-oriented here and there, but at the same time we’ve continued to work with traditional melodies, and the foreign languages, which didn’t feature on ‘Kunstraub’, have returned.”

“We have included a number of new medieval instruments in our classic repertoire,” adds Basti “Van Lange”, kindling anticipation of ‘Pikse Palve’, a folkloristic back-to-the-roots number in the tradition of the Merseburg Incantations, with lots of medieval sounds which are a _mélange_ of the Thunder Prayer and the Heiducken dance, complemented by an ancient Estonian lyric.

And for their new interpretation of a Welsh folk song, based on an old legend, Micha Rhein has even resurrected his old medieval drum.

Neither a rocking drive nor tough metallic sounds are neglected on “Quid Pro Quo”, starting with the first single ‘Störtebeker’, a rebel song about the Robin Hood of seamen. “This number really suits us. Its music is very folkloristic, pure medieval market music, typically IN EXTREMO,” says Micha Rhein. “We all love the sea – for me, it’s the biggest country on this planet. Störtebeker and his pirates raided rich merchant ships and gave their loot away to the poor.”

By no means less heavy is the title track ‘Quid Pro Quo’ with its driving riffs which culminate in a catchy chorus that makes it impossible to keep your feet still. The message behind it is just as direct: “’Quid Pro Quo’ means giving and taking, but today it’s all about taking. Everybody is on the take, never mind where you are. Money does the talking. Yes, that’s what you call social criticism!” Rhein explains, and Van Lange continues: “These lyrics are a joint effort that five of us worked on, which doesn’t happen often. We’re not a political band that allows itself to be used for any kind of cause, but in this case it was important to us to call a spade a spade. The shit that’s going on right now is so omnipresent that you have to wonder whether people are completely off their rockers.”

The seven give way to their love of Russia in two numbers: on the one hand in the legend of the Black Raven, symbolising the Grim Reaper, which features a rolling riff and Russian lyrics, and on the other hand in the raw rock number ‘Roter Stern’ featuring a wistfulness and heaviness that touch the soul. “For me, Russia is like home because I’ve known it since I was little,” Micha Rhein explains. “It’s a rough country with a warm heart and also one of the most beautiful places in the world.”

These two tracks are IN EXTREMO’s first collaboration with a Cossack choir from Moscow, whose majestic, haunting vocals lend both songs a very special aura.

And “Quid Pro Quo” has a few more premieres up its sleeve: Blind Guardian vocalist Hansi Kürsch, who has travelled Russia many times with his own band, features as guest vocalist on ‘Roter Stern’. “Hansi agreed immediately,” Rhein looks back. “When I told him that the lyrics are German, he said: ‘That’s interesting. I’ve never done that before’.”

Along with Kürsch, Marcus “Molle” Bischoff and Heaven Shall Burn’s Alexander “Ali” Dietz guest on “Quid Pro Quo”, lending their voices to the sinister-ferocious ‘Flaschenteufel’.

IN EXTREMO are set to present “Quid Pro Quo” on another tour, their itinerary already including Germany, Austria, Switzerland, Belarus, the Ukraine and Russia. “There will be a new stage set,” Van Lange promises. “But IN EXTREMO will always remain IN EXTREMO – a cheerful bunch of colourful personalities.”

And Micha Rhein predicts: “Before my inner eye, I can already see the cloud of dust that’s bound to rise when we play ‘Störtebeker’ at a festival. I’m really looking forward to that!”